Human surfactant protein D (SP-D), a collagen-containing C-type lectin and a member of the collectin family, is known to be involved in pulmonary surfactant homeostasis and immunity. The ability of recombinant fragment of human SP-D(rfhSP-D) to inhibit infection of SARS-CoV-2 was examined using pseudotyped lentiviral particles expressing SARS-CoV-2 S1 protein.
It was found that rfhSP-D bound SARS-CoV-2 S1 protein in a dose-dependent manner; this interaction was inhibited by maltose and EDTA. No rfhSP-D binding was observed in the absence of RBD in this assay.

These results highlight the therapeutic potential of rfhSP-D in SARS-CoV-2 infection.

A group from Los Alamos National Laboratory, etc. has reported on effects of glycosylation onto binding between SARS-CoV-2 RBD and ACE2 with using molecular dynamics simulations.
https://www.mdpi.com/1999-4915/13/5/927

These simulation results seem not to contradict with the other experimental result.

In addition, it was shown that N501Y would introduce additional stabilizing interactions with Y41 and K353 of ACE2, which will increase the binding affinity between RBD and ACE2. The same results from different groups are introduced in the past blog. 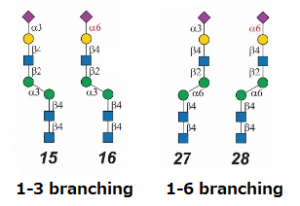 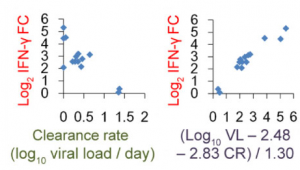 A group from Karolinska University Laboratory, etc. has reported on their new findings from 12 patients autopsies where the direct cause of death was determined as COVID-19 associated ARDS.
https://www.ncbi.nlm.nih.gov/pmc/articles/PMC8141733/

ARDS caused by COVID-19 appears to be the massive consolidation of the lung parenchyma. The process is initiated by virus replication in the pneumocytes leading to the desquamation of the alveolar epithelia and various levels of breach in the barriers between alveolar capillaries and the intra-alveolar space. With the increasing severity of this breach, edema fluid, plasma and eventually whole blood is leaking out into the alveolar space. Initiation of the coagulation cascade leads to the accumulation of fibrin filaments and/or intra-alveolar coagulated blood. Importantly only a minority of pneumocytes showed lytic virus replication but most pneumocytes in the affected area showed pronounced cytopathic effects in form of cytoplasmic swelling, vesicular degeneration and nuclear atypia.

Interestingly, the virus was replicating in the pneumocytes and macrophages but not in bronchial epithelium, endothelium, pericytes or stromal cells, suggesting that phagocytic cells consuming virus carrying cellular debris might themselves become infected, although the detailed mechanism is unknown.

The lung consolidation was accompanied with massive accumulation of CD163+ macrophages and immature myeloid elements, extensive proliferative response both in the epithelial and stromal components as well as exuberant neo-angiogenesis. The endothelial damage leading to the lung consolidation was considered to be caused by massive bystander effect, beyond the direct virus induced cytopathic damage, possibly induced by soluble factors such as ORF3a, inducing apoptosis in non-infected cells, released from the infected pneumocytes.

A group from Hirosaki University Graduate School of Medicine, has reviewed current status of urinary biomarker for prostate cancer.
https://www.ncbi.nlm.nih.gov/pmc/articles/PMC8100853/

At this moment, FDA approved marker for prostate cancer (PC) is just one, i.e., Serum PSA. The ratio of complex biantennary glycans of α-2,3-sialic acid (S2,3PSA) and α-2,6-sialic acid (S2,6PSA) in serum is closely linked to aggressive PC.
α2,3-linked Sialyl N-Glycan-Carrying Prostate-Specific Antigen
However, this is not replicated in the urinary PSA.

In the case of urinary PSA, it was thought that fucosylation of PSA could be a marker for PC. It has been found that Lewis-type or core-fucosylated PSA (detected by lectins such as AAL or PhoSL) was significantly decreased in PC. Also, core-fucosylated PSA was significantly associated with the Gleason scores of the biopsy specimens. The AUC for the prediction of prostate cancers of Gleason score ≥7 was 0.69 (P=0.0064) for urinary PSA-AAL and 0.72 (P=0.0014) for urinary PSA-PhoSL.
Decreased fucosylated PSA as a urinary marker

A group from University Hospital Arnau de Vilanova and Santa Maria, Spain, etc. has reported that miRNA profiles could be good markers for COVID-19
https://www.ncbi.nlm.nih.gov/pmc/articles/PMC8149473/

The expression levels of circulating miRNAs were compared between ward and ICU patients. Ten of 41 miRNAs were differentially detected. 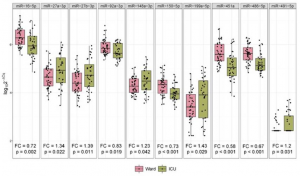 Multivariate predictive models were constructed to discriminate ward patients from ICU patients, and the obtained AUC reached 0.89 (95% CI: 0.81-0.97) which was comparable to, or even higher than, that observed for the contemporaneous test proposed as biomarkers of COVID-19 severity, such as leukocyte counts (AUC=0.72), D-dimer (AUC=0.87) or CRP AUC=0.72).

A group from New York University Grossman School of Medicine, etc. has reported that C-type lectins expressed on myeloid cells induce proinflammatory responses through the interaction with SARS-CoV-2.
https://www.ncbi.nlm.nih.gov/pmc/articles/PMC8106883/

It was investigated that the binding of human immunoglobulin Fc-tagged SARS-CoV-2 S, S1, and RBD recombinant proteins to HEK293T cells transfected with individual cDNA including five C-type lectins (DC-SIGN, L-SIGN, LSECtin, ASGR1, and CLEC10A) and Tweety family member 2 (TTYH2). It was clearly shown that the ectopic expression of the myeloid cell receptors in HEK293T cells supported SARS-CoV-2 engagement independently from ACE2. The binding of DC-SIGN, L-SIGN, ASGR1, and CLEC10A was not affected by soluble ACE2-His, but that of ACE2 and LSECtin was completely blocked by soluble ACE2-His, and also the binding of DC-SIGN and L-SIGN was completely inhibited by mannan. 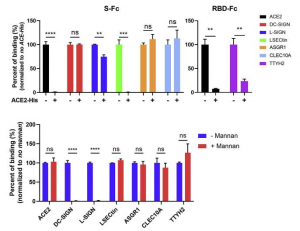 Furthermore, GFP-encoding HIV-based lentivirus pseudotyped with SARS-CoV-2 S protein (SARS-CoV-2 pseudovirus) was used to evaluate binding to those myeloid cell receptors. In the presence of the SARS-CoV-2 pseudovirus, robust GFP signals were observed in HEK293T expressing ectopic DC-SIGN or L-SIGN as well as expressing ectopic ACE2. The low level of SARS-CoV-2 pseudovirus engagement through LSECtin, ASGR1, CLEC10A, and TTYH2 was enhanced by co-expression of furin and/or TMPRSS2, which mediate S protein cleavage for viral entry. Consistent with our S protein mannan blockade results, pseudovirus-derived GFP signals through DC-SIGN and L-SIGN were inhibited by mannan treatment. These data suggested that these myeloid cell receptors can engage with the SARS-CoV-2 S protein on the pseudotyped virus. 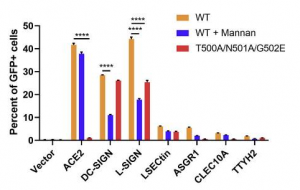 A group from Stanford University, etc. has reported that small noncoding RNAs are the third scaffold of glycosylation.
https://pubmed.ncbi.nlm.nih.gov/34004145/

Existence of glycosylated RNAs (named GlycoRNAs) was confirmed with the following protocol. Authors metabolically labeled cells with peracetylated N-azidoacetylmannosamine (Ac4ManNAz), and RNA was extracted with warm TRIzol, then ethanol precipitated, desalted via silica columns, stripped of protein contamination via high concentration proteinase K digestion, and repurified over silica columns. After RNA purification, Ac4ManNAz was conjugated to DBCO-biotin, visualized with streptavidin-IR800 (Strep), and imaged on an infrared scanner.

The RNA scaffolds for glycosylation was found to be small noncoding ones. Most of glycoRNAs existed on cell surface, and GlycoRNAs were modified with complex-type N-glycans with at least one terminal sialic acid residue. It was found that these GlycoRNAs directly bind to Siglecs. 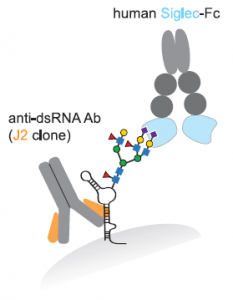 The framework in which glycobiology is presently understood excludes RNA as a substrate for N-glycosylation. This discovery of glycoRNA suggests the current view is incomplete and points to a new axis of RNA glycobiology, including as of yet undiscovered biosynthetic and trafficking mechanisms. Further, it highlights the possibility that cell surface glycoconjugates, which mediate and regulate important inter-cellular interactions.