A group from Gyeongsang National University, Jinju, Korea, etc. has reported that glutamic acid directly modulates the composition of the microbiome community of strawberry and tomato.
https://pubmed.ncbi.nlm.nih.gov/34930485/

Throughout plant development, the structure of the associated microbial community has a significant impact on plant health, especially in disease prevention by beneficial microbes such as Bacillus, Pseudomonas, and Streptomyces.

Whether l-glutamic acid can modulate the structure of the strawberry anthosphere microbial community was examined. Each of three treatments (untreated control, l-glutamic acid, or l-asparagine at a final concentration of 2%, pH 6.5) was sprayed for 1 min per plot at 2-week intervals. Enterobacteriaceae dominant from weeks 2–8 in the untreated control, in the l-asparagine treatment, and from weeks 2–4 in the l-glutamic acid treatment. Pseudomonadaceae were the second most abundant species, followed by Moraxellaceae. Enrichment of Streptomycetaceae occurred only in the l-glutamic acid treatment during weeks 6 and 8, accounting for 99.9 and 99.9% of the community (see below). 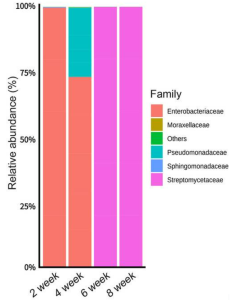 Then, the effect of l-glutamic acid on the occurrence of gray mold, blossom blight, and the density of Streptomyces globisporus SP6C4, in strawberry flowers was studied. Disease incidence (DI) was evaluated at 2-week intervals. At the same time, l-glutamic acid and l-asparagine were sprayed three times, at 2-week intervals, from week 4 to week 8. Gray mold DI from week 0 to week 4 remained relatively low (10–16%) regardless of treatment. At 6 weeks, the untreated control presented a DI of 16.6%; the DI in the l-asparagine-treated plot was 16%, and the DI in the plot treated with l-glutamic acid was significantly lower, at 12.4%. At week 8, the DI in the untreated control increased to 34% but that in the plot sprayed with l-glutamic acid was maintained below 17% (see below). 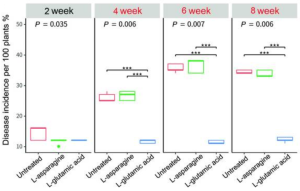 Thus, it was shown that glutamic acid reshapes the plant microbial community and enriches populations of Streptomyces, a functional core microbe in the strawberry anthosphere. Similarly, in the tomato rhizosphere with more complex microbiome, treatment with glutamic acid increased the population sizes of Streptomyces as well as those of Bacillaceae and Burkholderiaceae. At the same time, diseases caused by species of Botrytis and Fusarium were significantly reduced.

Neutralization titers of sera from 239 individuals who had been fully-vaccinated with one of three vaccines approved in the United States—mRNA-1273, BNT162b2, or Ad26.COV2.S were evaluated against wild type, Delta and Omicron variants (BNT162b2 manufactured by Pfizer-BioNTech, mRNA1273 manufactured by Moderna or as an adenovirus vectored vaccine (Ad26.COV2.S) manufactured by Janssen/Johnson & Johnson).

Cross-neutralization of Omicron variant was substantially higher in individuals who received three doses of either mRNA vaccine (GMNT increase of 19-fold for mRNA-1273 and 27-fold for BNT162b. Interestingly, Ad26.COV2.S vaccinees boosted with mRNA-1273 showed substantially higher wild type, Delta, and Omicron pseudovirus neutralization relative to those who received Ad26.COV2.S alone.

These data suggest that booster vaccines are quite effective in preventing Omicron variant infection. 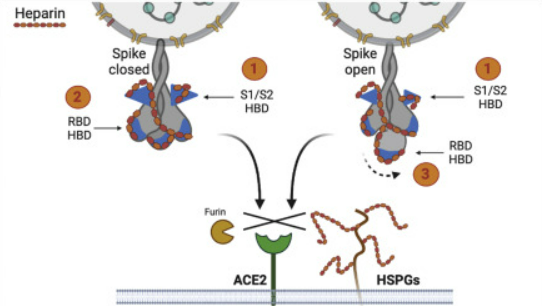 (1) Heparin binds the S1/S2-heparin binding domain (HBD) of spike in both the conformations, preventing furin cleavage,
(2) hinders the opening/activation of the closed spike, and
(3) acts allosterically on the hinge region associated with the movement of the RBD, while directly masking the RBD-HBD.

Microbiomes have drawn a great deal of attention and studies have begun focusing on manipulating these microbiomes in order to strengthen sustainable agricultural systems. In this context, genotype-specific recruitment of the microbiome is also gaining interest with the idea that host genotypes will attract bacteria with specific outcomes in different agroecosystems.

In this study, rhizosphere microbiome recruitment of six winter wheat genotypes (Eltan, Madsen, Hill81, Lewjain, PI561725 and PI561727) under growth chamber conditions were evaluated and have been found to be genotype-specific with increasing growth chamber daycicles. At 160-daycyles, microbiomes of PI561725 and PI561727 were clearly differentiated from others as shown below.

As aresult, differential abundance of Burkholderiales OTUs, specifically the genus Janthinobacterium in PI561727 and PI561725 cultivated soils, was associated with reduced root disease and better wheat growth. It is known that Burkholderiales OTUs could be a putative biological control agent against pathogen R. solani AG-8. Thus, using an appropriate wheat genotype to manipulate the rhizosphere microbiome could provide a sustainable approach to manage soil-borne disease.

AUC (0.797, 95% CI: 0.738–0.848) of IL-6/Lym ratio in SARS-CoV-2 related pneumonia was the highest compared with those of all the other analyzed biomarkers and the difference was significant with the exception of IL-6.

Despite the exact pathophysiology mechanism in Acute Respiratory Distress Syndrome (ARDS) of COVID-19 remains unclear, much studies shows that high levels of IL-6 and low lymphocytes count are biomarkers of cytokine storm and immune response in COVID-19. However the predictive power of these biomarkers is evaluated singularly. Combining two biomarkers by using the ratio between them could increase their predictive power.

In COVID-19 patients lymphocytes count has been included in a lot of ratios with other biomarkers for testing outcomes such as neutrophil/lymphocyte (Neu/Lym) ratio, platelets/Lym ratio, Lym/CRP ratio, lymphocyte to monocyte ratio, eosinophil to lymphocyte ratio . On the other hand, recently IL-6/Lym ratio has been proposed as an interesting prognosticator in patients with COVID-19.

A group from Division of HIV/AIDS and Sex-transmitted Virus Vaccines, Institute for Biological Product Control, National Institutes for Food and Drug Control, Beijing, China. has reported on degradation of neutralization of convalescent sera against SARS-CoV-2 Omicron variant.
https://www.tandfonline.com/doi/full/10.1080/22221751.2021.2017757 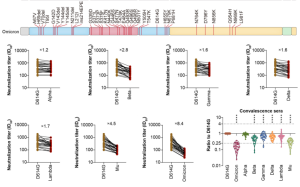 This study examined if the previously identified SARS-CoV-2 viral epitopes targeted by CD8+ T-cells in 52 individuals are mutated in the newly described Omicron VOC (n=50 mutations), because it is critical to determine the extent that Omicron may or may not be susceptible to existing humoral responses.
T-cell associated immunity is in general significantly more difficult for viruses to overcome due to the broad and adaptable response generated in a given individual, as well as the variety of HLA haplotypes between individuals.

It was found that of the mutations associated with the Omicron variant (n=50), only one in the Spike protein (T95I) overlapped with a CD8+ T-cell epitope (GVYFASTEK) identified in this subject population.
Despite the substantial number of mutations in the Omicron, in this population only one low-prevalence CD8+ T-cell epitope from the Spike protein contained a single amino acid change. No other mutations were associated with our previously identified SARS-CoV-2 T-cell epitopes. These data suggest that virtually all individuals with existing anti-SARS-CoV-2 CD8+ T-cell responses should recognize the Omicron variant, and that SARS-CoV-2 has not evolved extensive T-cell escape mutations at this point.

A group from Institute of Soil Science, Chinese Academy of Sciences, Nanjing, China, etch. has reported that Nguyenibacter sp. L1 is a good phosphate-solubilizing bacteria (PSB) in acid soil.
https://www.ncbi.nlm.nih.gov/pmc/articles/PMC8637293/

Phosphorus (P) is an essential macronutrient required for plant growth and productivity. Even in P-rich soils, more than 80% of P is immobile and not readily accessible for plant uptake. P exists in soil in different forms, mainly as inorganic and organic P, whose proportions are soil dependent. The forms of inorganic P also vary in soil as the function of soil pH. In alkaline soils, inorganic P exists mainly in the form of calcium phosphate, magnesium phosphate, and octacalcium phosphate, and in acid soils with high level of weathering, iron (Fe) and aluminum (Al) oxides strongly absorb P to form fixed Fe-P and Al-P.

One of the promising ways to improve plant utilization of fixed P in soil will be increasing the bioavailability of insoluble P by improving soil, such as by inoculating or enhancing PSBs in soil.

In this study, a PSB strain with Al-P solubilizing activity, Nguyenibacter sp. L1, from the rhizosphere soil of L. bicolor grown in acid soils was isolated. The solubilization of Al-P by Nguyenibacter sp. L1 is associated with the secretion of gluconic acid in the presence of glucose as a carbon source. Gluconic acid can also alleviate Al toxicity to plants.

A group from School of Life Sciences, Faculty of Medicine and Health Sciences, University of Nottingham, Nottingham, UK, etc. has reported about ええ.
https://www.nature.com/articles/s41522-021-00257-w

Pseudomonas aeruginosa is a versatile opportunistic pathogen that causes acute infection after invasive procedures and burns, and chronic infections in patients with persistent lung disease and compromised immunity1. P. aeruginosa infection is especially troublesome in people with cystic fibrosis where it is a major determinant of irreversible loss of lung function and mortality.

Carbohydrates from biofilms were purifies and analyzed by gel filtration chromatography. The biofilm carbohydrates were divided into high (>45 kDa, HMW) and low molecular weight (<45 kDa, LMW) fractions. Further, the differences in molecular weight between the HMW and LMW preparations were analyzed in detail, and the HMW fraction was divided into two fractions as follows, 15,370 Da for LMW, and 182,300 Da and 132,670 Da, for HMW-1 and HMW-2, respectively. The hydrolysed carbohydrate monomer compositions in weight % for HMW-1 is 74.9% mannose, 14.7% glucose, 7.4% galactose, and 3.0% rhamnose, and for HMW-2 80.9% mannose, 11.0% glucose, 2.3% galactose, and 5.7% rhamnose.

A group from Division of Laboratory Sciences, National Center for Environmental Health, Centers for Disease Control and Prevention (CDC), Atlanta, GA USA etc. has reported on changes in N-glycan profiles between the wild type (S-614D) and the variant (S-614G) SARS-CoV-2.
https://www.ncbi.nlm.nih.gov/pmc/articles/PMC8651636/

The site-specific distribution and abundance of heterogeneous N-linked glycans on 21 of 22 potential sequons were characterized by mass spectrometry analysis of the glycopeptides cleaved by the a-lytic protease or the combination of trypsin and chymotrypsin.

The relative abundances of the complex-type glycans were reduced by up to 45% on those sequons with altered N-glycosylation in the S-614G glycoprotein and the contents of high-mannose glycans, in contrast, were elevated by up to 33%.