Pseudomonas protegens EMM-1 was isolated from the rhizosphere of red maize. It was found that P. protegens EMM-1 can efficiently inhibit the growth of a broad spectrum of bacteria, including Klebsiella sp. and Streptococcus sp. 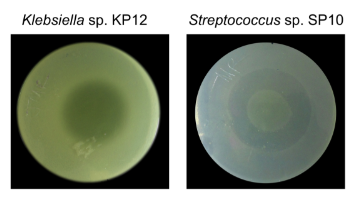 Anyway, this work demonstrated the significance of evaluating rhizospheric bacteria to discover inhibitory compounds that may potentially be used for the development of new antimicrobial therapies for application in medicine or agriculture.

An important question for vaccine development is whether the authentic virus, under the selective pressure of the polyclonal immune response in convalescent or vaccinated people, can evolve to fully escape immunity and antibody treatment. To address this question, authors co-incubated the authentic SARS-CoV-2 wild-type (WT) virus and a potent neutralizing plasma with Vero E6 cells for more than 14 passages and 90 days.

The plasma used in the co-incubation experiments was selected from 20 plasmas collected from COVID-19 convalescent patients between March and May 2020 where only the original Wuhan virus and D614G variant (SARS-CoV-2 WT and SARS-CoV-2 D614G variant) were circulating. The plasma (named PT188) showed the highest binding to the SARS-CoV-2 S1–S2 subunits and among the highest binding titers against the RBD (1/1,280).

The plasma fully neutralized the virus for seven passages, but, after seven passages and 45 days, the deletion of F140 in the spike N-terminal domain (NTD) N3 loop led to partial breakthrough. At 11 passages and 73 days, an E484K substitution in the receptor-binding domain (RBD) occurred, followed, at 12 passages and 80 days, by an insertion in the NTD N5 loop containing a new glycan, which generated a variant completely resistant to plasma neutralization.

GBS is an autoimmune disorder of the peripheral nervous system which is usually triggered by virus/pathogen infections.
The onset mechanism of GBS is considered as follows.
Antibodies targeting glycolipid-like antigens on virus/pathogen eventually form membrane attack complexes through activated complement cascades triggered by the cross-reactive attachment of the same antibodies onto GM1 on axonal neurons, and cause damages on peripheral nerve system. 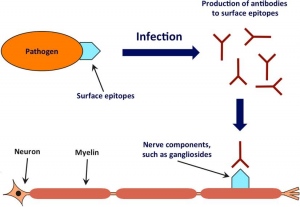 Blog admin is not sure what glycan structure on SARS-CoV-2 Spike induces a cross reactive antibody to GM1, but Galβ1-3GalNAc would be more likely comparing with others.

Since the launch of the Mx homepage, blog admin has been uploading 30 articles per a month (60 articles in total for the Japanese and English versions), so the number of index registrations has reached a reasonable level.
However, perhaps because of that, I feel that the speed from requesting indexing on the Google Search Console to actually indexing is slowing down.
Moreover, it is remarkable after the number of articles reached about 500, and it seems that 500 may exist as one delimiter in the upper limit of index registration.
This may be especially true for Mx, as it’s only a short time since Mx domain was created and there isn’t much traffic.
A comment on the solution from a Google representative states that the number of pages should be reduced to make the entire site more powerful, which is a problem for sites such as blog sites where the number of articles continues to increase. Isn’t it?
https://youtu.be/6Lu2F_y54fg

When I check the indexing using Microsoft’s Bing as a search engine, it seems that the indexing is fairly fast (within the day I posted articles), and Google feels slow.
I feel sorry for Google.
I feel that Bing is now better than Google.

Anyway, I will slow down the speed of posting new articles a little bit from the next month.

Scedosporium apiospermum is an emerging opportunistic fungal pathogen responsible for life-threatening infections in humans. Host–pathogen interactions often implicate lectins that have become therapeutic targets for the development of carbohydrate mimics for antiadhesive therapy. Here, we present the first report on the identification and characterization of a lectin from S. apiospermum named SapL1.

To identify the potential ligands of SapL1 on lung epithelial cell surfaces, SapL1 was applied onto the glycan array version 5.4 of the Consortium for Functional Glycomics (USA) consisting of 585 mammalian glycans. It was labelled with Fluorescein Isothiocyanate (FITC) and its binding properties were analysed at two different concentrations (5 and 50 μg/mL). SapL1 recognizes fucosylated oligosaccharides independently of the fucose linkage. The α1,2 and α1,3/4 linked fucosides displayed the highest affinity whilst the lowest was seen with the α1,6 linked ones. The weakest interactions with fucosylated compounds were reported for branched oligosaccharides.

Analysis of the glycans constituting blood group determinants revealed that SapL1 binds to all epitopes with a preference for H type 2 blood group (Fucα1-2Galβ1-4GlcNAcβ) then Lewis a (Galβ1-3(Fucα1-4)GlcNAcβ) and Lewis X (Galβ1-4(Fucα1-3)GlcNAcβ). However, most of the recognized branched oligosaccharides contained the core fucose Fucα1–6. Epitopes with two fucose units, such as Lewis b and fucosylated polylactosamine, were also well recognized. Addition of α-galactose or α-GalNAc as in blood group B or A antigens did not impair Fucα1-2 recognition. 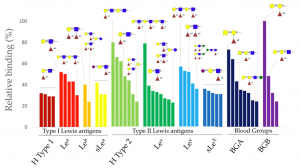 A group from Harvard Medical School, USA, etc. has reported that as many as 10% of circulating monocytes and 8% of lung macrophages in COVID-19 patients were infected with SARS-CoV-2, and FcR-mediated uptake of antibody-bound virus triggers inflammatory death (pyroptosis), which is really a double-edged sword in COVID-19.
https://www.researchsquare.com/article/rs-153628/v1

How SARS-CoV-2 triggers inflammation is not clearly understood.

Monocytes and macrophages are sentinel immune cells in the blood and tissue, respectively. These immune cells sense invasive infection, and form inflammasomes that activate caspase-1 and gasdermin D (GSDMD) pores leading to pyroptosis and release of inflammatory cytokines.

Monocytes are generally thought not to express ACE-2. Indeed, ACE-2 was not detected or barely detected by flow cytometry and qRT-PCR on both healthy donor (HD) monocytes, even when they were activated by SARS-CoV-2. Monocytes express 2 Fcg receptors – CD32 (FcgRII, expressed on most blood monocytes) and CD16 (FcgRIII, expressed on a small minority of blood monocytes that are activated and increased in number in COVID-19 patients). These receptors could recognize antibody-opsonized viral particles and mediate their entry via antibodydependent phagocytosis (ADP).
Release of large proteins such as the tetramer LDH, is a pathognomonic feature of pyroptosis and other forms of necrotic cell death. Elevated LDH was one of the best correlates of severe COVID-19 disease. Plasma levels of GSDMD, LDH, IL-1RA and IL-18, were all elevated in severe patient samples compared to those with mild or moderate disease. And also, GSDMD eQTLs were most significantly associated with increased COVID-19 respiratory failure.

The cohort included 33,993 fully vaccinated adults, 49% women, with a mean age of 47 years (SD, 17 years). In this large population of individuals who have received two doses of the BNT162b2 vaccine, a significantly higher risk of SARS-CoV-2 infection among patients who have received their second vaccine dose since at least 146 days. The increase was significant for all age groups, with the strongest increase observed for patients aged 60 or more, with an odds ratio for infection of 3.00. However, we should note that throughout the study period, most of the new infections by SARS-CoV-2 were with the delta variant B.1.617.2 (93% of 113 isolates sent for sequencing in our health organization). 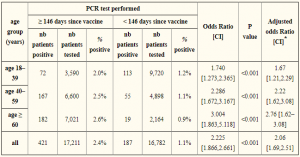 Blog admin feels that the current Pfizer-BioNTech vaccine is effective against the delta variant, but it would be better to get a boost vaccination after 6months from the full (2 times) vaccination.

A group from International Centre for Genetic Engineering and Biotechnology, Trieste, Italy, etc. has reported on effects of Pseudomonas chlororaphis inoculation in Rice rhizosphere.
https://www.ncbi.nlm.nih.gov/pmc/articles/PMC8309335/

Among the group of Plant Growth-Promoting Rhizobacteria (PGPR), strains belonging to the Pseudomonas chlororaphis species have been found in association with a wide range of plants, both mono- and dicotyledonous, and both wild and cultivated. P. chlororaphis is currently classified into four subspecies, namely chlororaphis, aureofaciens, aurantiaca, and piscium. Several strains of P. chlororaphis have shown potential for application as plant probiotics due to their rhizosphere colonization abilities and plant-associated beneficial phenotypes such as chemotaxis and motility, biofilm formation, P solubilization, aminocyclopropane-1-carboxylic acid (ACC) deaminase, Indole-3-acetic acid (IAA) production and biocontrol.

In order to determine the effects of P. chlororaphis on plant growth, several phenotypic parameters were assayed. Statistical analyses were carried out on chlorophyll, flavonoid content and nitrogen balance index (NBI) as physiological parameters. In addition, plant height and dry shoot biomass at 90 days post inoculation (dpi) were also established. Results did not show any statistical differences between control and P. chlororaphis inoculated plants, although a tendency on higher NBI and lower flavonoid contents was measured in inoculated plants compared with the control. It was concluded that under the conditions tested, no significant plant beneficial effect was observed upon seed inoculation of P. chlororaphis.

However, there was a possibility that the plant defense system could be primed by P. chlororaphis maintaining a low level of stress.
In P. chlororaphis inoculated plants, it was found that expression of genes associated with defense OsISAP1, encoding for a multiple stress-responsive zinc-finger protein, was up-regulated at 28 dpi, suggesting an activation of the plant defense mechanisms.

COVID-19 patients suffered from headache had significantly higher serum levels of HMGB1, NLRP3, ACE2, and IL-6 than COVID-19 patients without headache, whereas CGRP and IL-10 levels were similar in the groups.

Taken all the data together, it was suggested that HMGB1 as a potent proinflammatory molecule with nociceptive properties would be a central player in proinflammatory reactions during SARS-Co-V2 infection and induce headache through activation of trigeminal neurons.

Extracellular HMGB1 is secreted from activated macrophages, monocytes natural killer cells and dendritic cells in response to pathogen invasion such as SARS-CoV-2. Neurons, astrocytes, microglia, and endothelial cells are also able to actively secrete HMGB1 after exposure to cytokines, interferons, etc. Furthermore, cell injury and necrotic process caused by ARDS of COVID-19 can greatly contribute to increase of serum levels of HMGB1.

The lipopolysaccharides (LPS) are highly complex macromolecules found exclusively as a monolayer on the outer membrane of gram-negative bacteria. These glycoconjugates are composed of three regions: the lipid A that anchors the molecule to the outer cell membrane, the core oligosaccharide, and the O-antigen. The LPS from Herbaspirillum seropedicae strain (wild type) has lipid A-core containing different degrees of O-antigen oligomerization, however, the LPS from the mutant strain LPSEB (waaL) lacks the O-antigen, has only the lipid A-core. Here, H. seropedicae is a plant growth-promoting diazotrophic betaproteobacterium which associates with important crops, such as maize, wheat, rice and sugar-cane.

Maize root colonization of both wild type and mutant strains showed dose-dependent increases (as shown in a figure below A), however, the numbers of the waaL mutant cells attached to the roots were always lower than those of the wild type. Co-inoculation assays revealed a clear predominance of the wild type strain against the waaL mutant for attachment (see the figure below B). 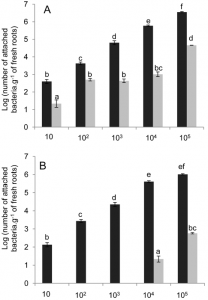 It is likely that the interaction between LPS O-antigen and the MRLs is a key step for the establishment of the bacteria onto the root enhancing H. seropedicae attachment and conferring a competitive advantage during colonization of root surfaces, to gain access to inner tissues.