A number of studies carried out in several countries have supported an association between ABO type and SARS-CoV-2 susceptibility to infection and/or outcomes. The reasons for the association of severe COVID-19 with blood type A are unknown, but it has been suggested that this could be caused by O group patients having anti-A type antibodies, that A type glycans could function as co-receptors for SARS-CoV-2 or due to the known effects of blood groups on thrombosis risk due to von Willebrand factor (VWF) levels.

The result obtained here is that the association of blood group A with hospitalization was (RR = 1.24, CI 95% [1.05, 1.47], p = 0.0111), and blood group A with cardiovascular complications was greatly increased (RR = 2.56, CI 95% [1.43, 4.55], p = 0.0011), but group A non-secretors were significantly less likely to be hospitalized than secretors. Why the difference between group A and O was so large in COVID-19 related cardiovascular complications was considered to be due to VWF related origins.

A group from University of Crete, Greece, has reported that p-cymene could be an antiviral drug for SARS-CoV-2.
https://bpspubs.onlinelibrary.wiley.com/doi/10.1002/prp2.798

Treatment of SARS-CoV-2 infected Vero cells with variable concentrations of p-cymene resulted in a significant decrease of plaque formation and viral titer in the culture supernatants (up to 90%, verified by Q-PCR), at concentrations ranging from 0.0125 to 200 μg/ml, after 2 days of incubation. Up to 95% reduced titer was also observed during pre-treatment of Vero cells, by Q-PCR, prior to infection with SARS-CoV-2. The IC50 during co-treatment was 74.5 μg/ml, while pre-treatment IC50 was reduced to 57 μg/ml. Importantly, p-cymene at concentrations <100 μg/ml does not impair cell viability. Molecular dynamics simulations of SARS-CoV-2 N protein complex with Importin A, in the absence or the presence of p-cymene, revealed that p-cymene is able to destabilize the nucleocapsid–importin complex, resulting in inhibition of its nuclear translocation. 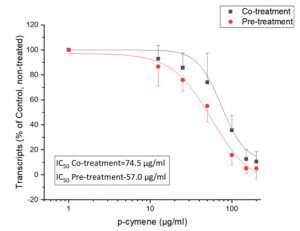 Targeting cardiovascular events (CVE) as one of primary outcomes originating from the diabetes, urinary glycomes in 680 patients with type 2 diabetes were evaluated with using Lectin microarrays.

During approximately a 5-year follow-up period, 62 patients reached the endpoint. Cox proportional hazards analysis revealed that urinary glycan signals binding to two lectins were significantly associated with the outcome after adjustment for known indicators of CVE and for false discovery rate, as well as increased model fitness. Hazard ratios for these lectins (+1 SD for the glycan index) were UDA (recognizing glycan: mixture of Man5 to Man9): 1.78 (95% CI: 1.24–2.55, P = 0.002) and Calsepa [High-Man (Man2–6)]: 1.56 (1.19–2.04, P = 0.001). Common glycan binding to these lectins was high-mannose type of N-glycans.

The urinary excretion of high-mannose glycan may be a valuable biomarker for improving prediction of CVE in patients with type 2 diabetes. It is still unclear what kinds of mechanisms are underlaying such abnormal N-glycosylation.

STL showed moderate binding to core 2 and 6 glycans presenting a terminal LacNAc motif (with/without further modifications) but not to core 1 and 3 structures.
PNA selectively bound to T antigen and core 2 glycans with an unmodified β1-3Gal branch.
Jacalin bound strongly to all core 3 and nearly all core 1 glycans (devoid of α2-6 sialylation) at the same level of the Tn antigen, but did not bind to any core 2, 4, or 6 structures. 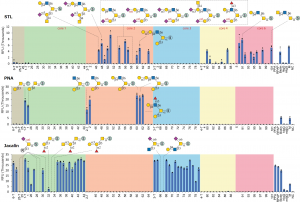 A group from Portuguese Institute of Oncology, etc. has reported that HOMER3 with sialyl-T and sialyl-Tn antigen could be a therapeutic target for bladder cancer (BC).
https://www.ncbi.nlm.nih.gov/pmc/articles/PMC8188679/

A total of 10 major glycans structures were identified for both BC cell lines: 5637 and T24, which present similar O-glycomes. Notably, both cell lines expressed high levels of mono- and di-sialylated T antigens (sialyl-T), also exhibiting neutral core 1 and sialylated and/or fucosylated core 2 structures

Among these, GLUT1(SLC2A1) and HOMER3 ranked first, suggesting potential for targeted therapeutics. GLUT1 is a pivotal membrane glucose transporter frequently overexpressed in more aggressive bladder tumours. HOMER3 has been implicated in neuronal signaling, T-cell activation and trafficking of beta amyloid peptides. HOMER3 at the cell membrane co-localizes in the same tumour area with sialyl-Tn and sialyl-T antigens in BC. According to immunohistochemistry, HOMER3 was diffusely expressed in wide tumour areas, both at the cytoplasm and cell membranes. These areas co-localized with very high sialyl-Tn and/or sialyl-T expressions areas. 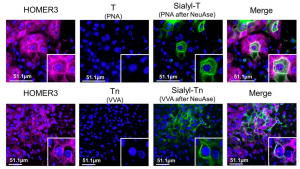 Through case studies with over 80,000 samples, it was concluded that having both IL-6 ≥10 pg/mL and hs-CRP ≥10.0 mg/L very accurately predicts the need for hospitalization in COVID-19 positive patients. Only two parameters are good enough to predict.

This is a report from a group of Boston Heart Diagnostics/Eurofins Scientific Network, USA, etc.

Universidad de Oviedo, Spain has developed aptamers binding to both the glycan and the near the peptide region of human prostate specific antigen (hPSA).
https://pubmed.ncbi.nlm.nih.gov/34094206/

To achieve a finer direction of the aptamers for integrating in the recognition both the glycan and the near peptide region of hPSA, Pholiota squarrosa lectin (PhoSL) was used as a specific lectin of α1-6 core-fucose, increasing the likelihood of obtaining aptamers specific for the glycosylation site of the protein.

The SELEX approach involved the immobilization of either hPSA or recombinant PSA (rPSA), which has no glycans, onto magnetic particles (MPs), using bovine serum albumin (BSA) as a blocking agent. Each SELEX round included a negative selection step with BSA–MPs to eliminate sequences that bind to BSA, followed by a counter-selection against rPSA-MPs to remove molecules that bind to the protein by regions different from the glycosylation site, and a positive selection step with hPSA–MPs to enrich the starting library in sequences that bind to the desired glycan moiety in the protein.

After these initial rounds, the pool was split to perform two distinct routes. Strategy A includes an extra more stringent counter-selection step by blocking the α1-6 core-fucose with PhoSL, removing molecules that remained bound to the blocked protein. Strategy B, in contrast, relies on the competitive elution of aptamers bound to the PhoSL binding site. Atrategy A leads to a decrease in the number of aptamers bound to hPSA, while the competitive elution with PhoSL produces a progressive increase in both population of hPSA-binders and their average binding affinity.

A figure below shows binding specificity of selected aptamer (PSAG-1）including two core-fucosylated glycoproteins: lipocalin-2 (NGAL) and α-fetoprotein (AFP). If more precise glycan structures specific to prostate caner could be recognized with this type of aptamers, it would be great. 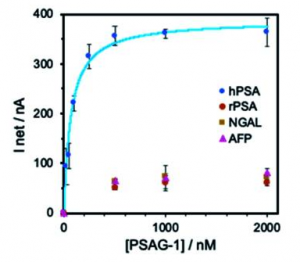 A group from The Ohio State University, etc. has reported that cell-to-cell transmission could be a major factor in SRAS-CoV-2 infection spread.
https://www.ncbi.nlm.nih.gov/pmc/articles/PMC8183005/

Interestingly, it was shown that endosomal entry pathways were also involved in cell-to-cell transmission of SARS-CoV-2 and SARS-CoV. This is evidenced as shown below by the inhibitory effect of drugs that specifically target the endosomal entry pathway of these viruses, including the CatL inhibitor III, which blocks cleavage of the viral glycoprotein, as well as BafA1, which neutralizes endosomal pH. 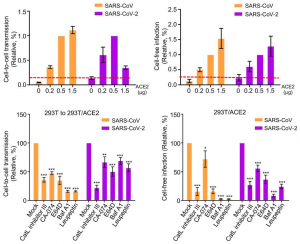 A group from Rockefeller University, etc. has reported on naturally enhanced neutralizing antibodies after one year from SARS-CoV-2 infection.
https://www.biorxiv.org/content/10.1101/2021.05.07.443175v2.full 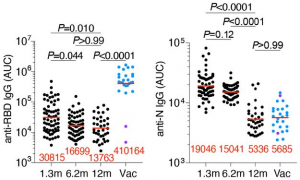 To determine whether there was an increase in neutralization breadth over time, the neutralizing activity of the 60 antibodies was assayed against a panel of RBD mutants covering residues associated with circulating variants of concern: R346S, K417N, N440K, A475V, E484K and N501Y. Increased activity was evident against K417N, N440K, A475V, E484K and N501Y suggesting that evolution of the antibody repertoire results in acquisition of neutralization breadth over time. 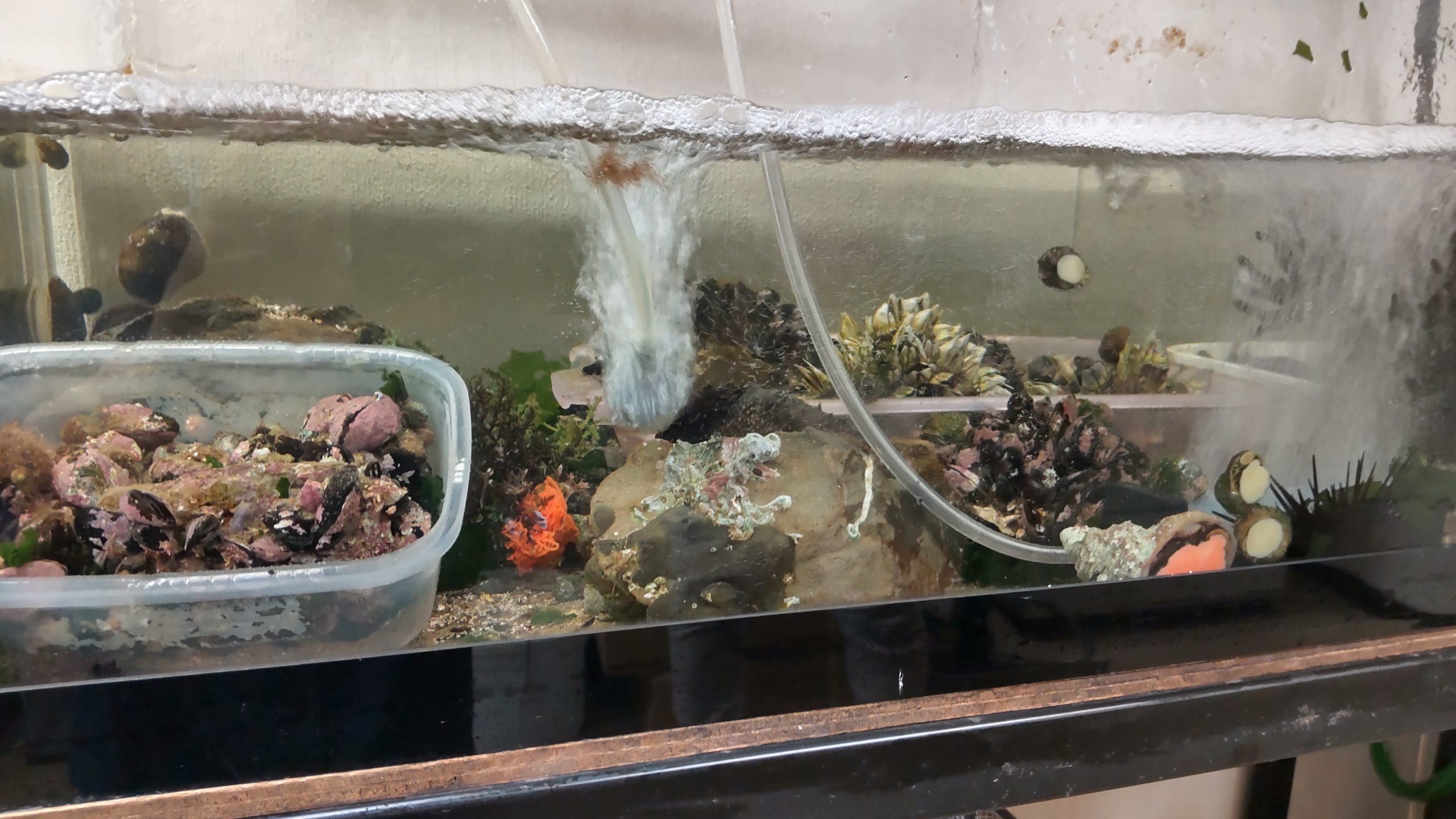