P-selectin glycoprotein ligand-1 (PSGL-1/CD162) has been studied extensively for its role in mediating leukocyte rolling through interactions with its cognate receptor, P-selectin. Structurally, PSGL-1 is a highly glycosylated homodimeric transmembrane protein, with an extracellular domain (ECD) of 50–60 nm in length that extends far out from the cellular surface.

In reality, PSGL-1 plays diverse roles in the physiology of HIV-1 infection. It has been shown that the viruses with high levels of PSGL-1 are not infectious as show below. 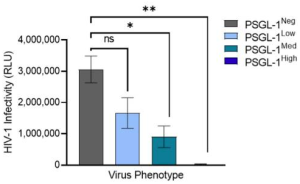 Since the primary target of HIV-1 infection, CD4+ T cells, are often found on activated endothelial tissues which display P-selectin in inflammatory conditions, it was interested in testing whether virions captured by P-selectin could be transferred to nearby permissive cells to elicit infection.
It was decided to test this model with T cell line and PBMC viruses, which contained lower levels of PSGL-1 and higher levels of gp120. We observed that viruses produced in T cell lines and primary PBMC were captured by P-selectin at levels that were markedly higher than the control. Most importantly, both viruses were effectively captured by P-selectin and transferred to HIV-1-permissive cells, suggesting that this mechanism of PSGL-1-mediated virus capture and transfer might also occur when HIV viruses encounter P-selectin on cell surfaces in vivo.