A group from School of Bioengineering, Qilu University of Technology (Shandong Academy of Sciences), Jinan, China, etc. has reported about effects of inoculation of Trichoderma atroviride HB20111 onto wheat rhizosphere microbiome.
https://www.ncbi.nlm.nih.gov/pmc/articles/PMC9188553/

Fusarium crown rot and wheat sharp eyespot are major soil-borne diseases of wheat.
Biological agents Streptomyces, Bacillus subtilis, Pseudomonas, Actinomyces, Trichoderma, etc. can reduce the colonization of pathogenic fungi, produce antibiotics and organic compounds in the soil, and promote plant growth. Seed dressing is a cost-effective method that has the potential for large-scale application in the prevention and control of crop diseases. As a biocontrol agent, Trichoderma seed dressing has been increasingly used to control plant fungal diseases. Common pathogens controlled by Trichoderma include Bipolaris sorokiniana, F. pseudograminearum, F. oxysporum, R. solani, R. cerealis and many other plant pathogens. 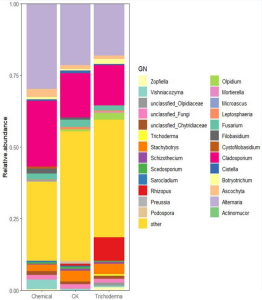