The standard treatment for advanced PCa is androgen deprivation therapy (ADT). Although hormone-sensitive PCa is curable with ADT, most patients progress to castration-resistant prostate cancer (CRPCa) and metastatic CRPCa (mCRPCa). Front-line docetaxel treatment is administered to patients with CRPCa and mCRPCa to improve survival. Docetaxel is a chemotherapeutic agent belonging to the taxane class of drugs. Docetaxel-based chemotherapy has shown survival benefits and has emerged as the primary treatment for CRPCa. Nevertheless, docetaxel resistance after half a year of therapy has emerged as an urgent clinical concern in patients with CRPCa and mCRPCa.

Fucoidan, sourced from various matrices of brown seaweed, is primarily composed of a complex sulfated polysaccharide, shows anti-cancer effects, and binds to P-selectin.

In this study, it was demonstrated that the combination of Fucoidan/Docetaxel on docetaxel-resistant DU/DX50 cells shows a potent synergistic antiproliferative effect as shown below. 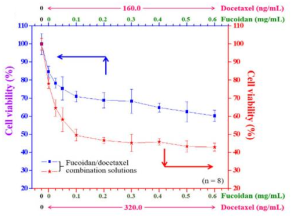 It was also observed that fucoidan reduced the migration and invasion of DU/DX50 cells. Since the protein levels of IL-1R, IKKα, NF-κB p50, and Cox2 were downregulated with an increased concentration of fucoidan, the observed attenuation of cancer cell migration, invasion, and cell viability would be due to the binding effect between fucoidan and P-selectin, resulting in the downregulation of the IL-1R signaling pathway, including reduced levels of NFκB p50 and Cox-2. It is known that IKKα and NF-κB p50 are involved in cancer cell proliferation and metastasis, and the activation of Cox2 promotes tumor growth and resistance to chemotherapy and radiotherapy.